When the William P. Dole monument in Edgar Cemetery was knocked to the ground by a falling tree limb in September of 2013, it caught 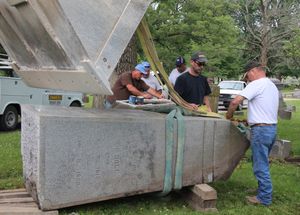 the attention of people in the area who recognized its historical significance. Conversations ensued and interest grew to remount and restore the stone to its former grandeur.

As Edgar Cemetery Association president Jim Englum was approached, he explained that the cemetery is unable, according to by-laws and financial constraints, to repair broken stones, big or small. The earliest burials in this cemetery took place in the early 1800s, and numerous stones have received damage through the years. 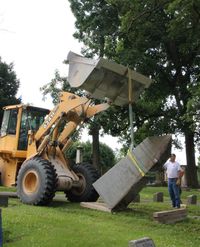 “The cemetery does not repair damaged stones in the cemetery, although I wish we could,” said Englum. “We do not offer perpetual care services according to our by-laws. And we do not have the resources to repair stones damaged from weather, age or neglect.”

That job is, instead, the responsibility of the families who are connected to the deceased or interested parties, Englum explained. Edgar Cemetery receives no tax funds, and a modest income is used for daily maintenance pertaining to labor, grass, graves, roads and beautification, leaving little funding for other things.

At the time the Dole monument was damaged, the stately oak trees overhead were laden with a bumper crop of acorns, adding to the weight of the overhanging branch, according to cemetery superintendent Bruce Quinn. When the limb fell, the damage was done. 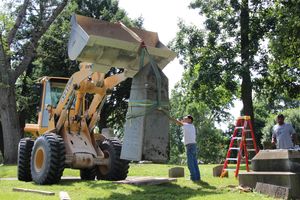 “We cringe when thunderstorms erupt, because many of the original trees in the cemetery are frail and reaching their end,” said Englum. “It is not uncommon to have old tree limbs cause damage as they fall to the ground.

“In some cases, homeowners insurance covers damage to stones of lot owners and family members,” Englum noted. “Beyond that, we place all broken pieces on the associated grave.” 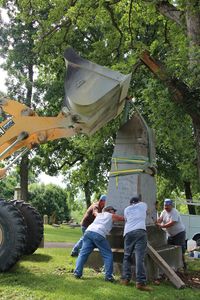 Public attention about the Dole monument then turned to the Edgar County Historical Society where members who had concern for the damage wanted to remount the mammoth gravestone upon its base. According to estimates, the top weighs approximately 4 tons, and the base, another 8 tons, totaling over 12 tons of Vermont granite.

The Society recognized Dole’s connection to Abraham Lincoln and publicized the need to help the cause. The damage estimate was $5,000, and the funds were raised.

The Society agreed to assist in paying for the restoration with these funds. Then the Cemetery Association coordinated the restoration efforts which occurred Monday, June 15, with the help of Chris Patrick of Zimmerly Ready Mix who provided a lift for the fallen stone, and Adams Memorials, who completed the project of adhering the top to the base.

The Edgar County Historical Society has placed a new bronze plaque on the Dole monument which highlights his achievements.